Playing With Gravity, or What Scullers Can Learn From Nordic Skiing

I participate in Nordic skiing not so much because of any inherent fascination with it but rather because it's what there is to do around here from December through March if you're an endurance athlete.  And if you're reading that as an insult to the activity, then I beg your pardon, because that's not the intent.  Though I came to the sport late and it doesn't quite grab me by the lapels the way that sculling always has, there are days when I can see how it might.  What is most important for my purposes, though, is that there are a lot of insights into sculling that can be gained by paying attention to what makes you a better Nordic skier.  I'll only nod in the direction of the cross-training benefit by acknowledging that from my perspective at least, Nordic skiing exposes the limitations of steady-state training on flat water: because there are no hills in sculling, the sheer sameness of always training on a level surface can be problematic if for no other reason than that it's all too easy to fall into a routine in which the most important training principle (VARY THE STIMULUS) is insufficiently honored.  Ninety minutes of steady state at 22 SPM three times a week is almost inevitably going to create a less varied stimulus than three skiing outings of ninety minutes over varied terrain including climbs, descents, transitions, and varying routes and snow conditions.  As has been observed more than once around here, "Nordic skiing is 100% fartlek; there's no such thing as steady state unless you live where it's flat."

None of that, however, gets at the technical insights for sculling that can come to you from playing with gravity as a skier.  I don't remember exactly when Pepa first showed me what has become my favorite skiing drill, but I keep coming back to it every time I want to add to my understanding of what constitutes good skiing.  And like most things that initially appear to be magic that on closer examination are revealed to be simple physics, it has the potential to teach us something.  Describing it rather than demonstrating it probably won't do it justice, but I'll hope for the best.  To start with, she places her skis in a "V".  From there, she positions her bodyweight where she knows it needs to be, flexing her ankles, dropping her hips, and adjusting her center of gravity.  And without appearing to move any of her limbs at all, the skis begin to move forward on their own, as if by magic.  Anyone with even a modicum of understanding of skiing can do this, but when you see it as a brand-new beginner it tends to make an impression.  The skeptic watching this demonstration on level ground may dismiss it and think or say something like "big deal, you're just pressing out with your feet" or some variation of that, but most people are more impressed when the drill is moved to a hill and repeated so that it becomes clear that one can actually begin to "climb" uphill without taking any steps.  If the bodyweight is positioned appropriately, the skis still move on their own, even on fairly steep inclines, and it becomes apparent that it isn't just alpine skiing that involves playing with gravity; if anything, Nordic skiing places an even greater importance on it.  An observant skier begins to notice that, more than perhaps anything else, it is the position of the body over the ski that determines whether one moves through space rapidly or slowly (or perhaps even goes backward).  This may lead to the realization that skiing, in an important sense, can be understood as controlled falling, and that it is desirable to learn how to "fall uphill" if one wants to climb effectively rather than muscle one's way up a slope.  Further, it doesn't take long for an attentive skier to notice that shifting one's bodyweight skillfully during the rhythmic cycle of moving from one ski to the other makes a huge difference in the speed that one travels.  I can almost hear Pepa saying "Over one, ofer the other!  Over one, now ofer the other" right now, in her thick Bulgamerican accent.

What that's got to do with sculling may or may not be obvious, and for that matter, I may or may not be right about this, but I think that if body position over the ski and rhythmic, effective shifting of the bodyweight is critical to speed in Nordic skiing (and it is), then body position within the shell and rhythmic, effective shifting of the bodyweight is probably critical to speed in sculling, and that if playing with gravity skillfully by intuitively adjusting the position of your body as it moves through a rhythmic cycle is what separates great skiers from mediocre ones, the same is probably true for scullers.  Although I never rowed for Igor Grinko, I'm told that one of his favorite calls to his scullers is "USE YOUR BODYWEIGHT!" and I think that's telling - Igor's early wrestling matches with the English language are legendary, and particularly during his first years in the states he had to find ways to use what he knew effectively, so the phrase might be seen as a powerful distillation of what's really important in sculling.  Sculling, like skiing, involves playing with gravity, and that has everything to do with how you position your bodyweight throughout the stroke cycle.  And it is as true on level, liquid water as it is on varied terrain with frozen water underfoot.  Sculling well involves learning to fall horizontally - this is part of what wise coaches mean when they say "rowing is not a pulling sport." Learn to play with gravity - it never gets tired.
Posted by Troy Howell at 2:43 AM 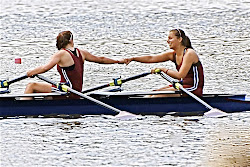